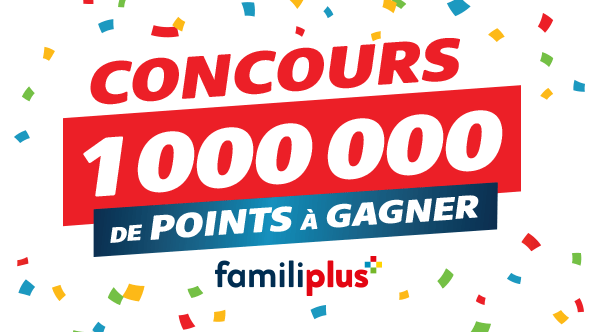 Present your Familiplus card at checkout when making a eligible purchase. To get 10 times more chances to win, buy one of the featured products. The more you present your card, the more chances you have to win!

From September 19 to October 16, 2019, with any purchase of an eligible product specifically identified in a Familiprix pharmacy located in Québec or New Brunswick and upon presentation of a valid Familiplus member card, a participant will automatically receive 10 additional chances to win the draw.

b. Legibly handwrite a letter of at least 50 words explaining why you would like to win one of 20 prizes of 50,000 Familiplus points. Include your first and last name, full address including postal code, phone number including area code, email address, age, and member card number. Sign the letter and mail it in an envelope with sufficient postage to “Familiplus Anniversary Contest” 6000 rue Armand-Viau, Quebec City, QC, G2C 2C5. Entries must be postmarked no later than October 16, 2019, failing which they will be void. Once your letter has been validated, you will automatically receive one entry in the draw. Only one letter per member will be accepted.

5. There will be 20 random draws on October 31, 2019, at 11 a.m., at 6000 rue Armand-Viau, Quebec City, in the presence of representatives of Familiprix Inc. from among all eligible transactions during the contest period. The odds of being selected for a prize depend on the total number of transactions registered during the contest week.

6. The entrants whose names are drawn must correctly answer the mathematical skill–testing question that will be asked in order to be officially declared winners 5 x 2 + 8 – 3 = ?.

a. Before being declared a winner, the winner must sign a declaration form attesting that he or she has complied with the contest rules and a release form releasing suppliers of prizes, the organization in charge of judging the contest, and all of their respective subsidiaries, managers, board members, employees, agents, representatives,

successors, and rightowners from any and all liability resulting from the contest or the acceptance or use of a prize. The declaration and release forms must be returned within fourteen (14) days of the date on the notice, failing which the prize may be forfeited.

b. Entrants who fail to comply with these official rules will be disqualified. The prize will only be awarded to confirmed winner. The prize is nontransferable and must be accepted as awarded. Prize cannot be substituted for any other prize. By entering this contest, all entrants agree to abide by the official rules and judges’ decisions regarding any aspect of this contest, which shall be final and binding. Subject to the approval of the Régie in Quebec, the sponsor reserves the right to cancel or change this contest at any time without notice or by publishing a notice in the main regional newspapers if any factor whatsoever compromises the operation of this contest as stipulated in these contest rules. Entrants will not be contacted in any way, with the exception of the winner, who will be contacted by mail or phone. If the winner fails to respond within 15 days of the draw, the win will be voided, and a new draw will be held on November 14, 2019 with the same terms and conditions as above. 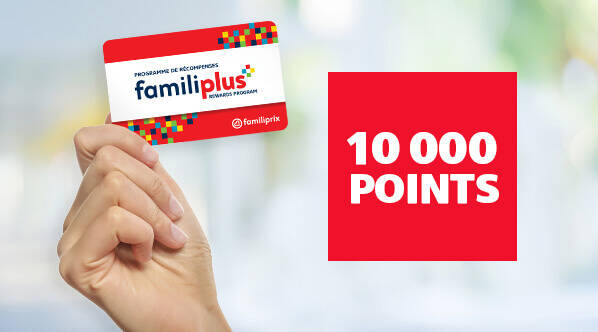 You could win 10,000 Familiplus points! It’s easy to enter: Present your Familiplus card at checkout when making a eligible purchase.