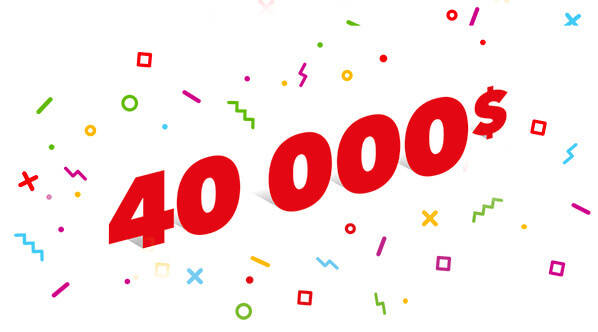 Familiprix is thrilled to announce the winners of the Familiplus “You could win $40,000” Contest, which took place between February 18 and March 17 in all of our branches.

Each winner will receive $10,000 in cash—simply because they used their Familiplus card during the contest period!

It pays to be a Familiplus member!

Congratulations again to all of our winners!

3.    In addition, show your Familiplus member card at the counter when you buy eligible products. You will get 10x more chances to win when you buy featured products each week. Look for the “Featured Products” sign in store for product details.

4.    To enter the contest without making an eligible transaction, you must:

a.    Sign up for free for the Familiplus Program in a participating store or on the My Familiplus mobile app.

b.    Legibly handwrite a letter of at least 50 words explaining why you would like to win $10 000 cash. Include your first and last name, full address including postal code, phone number including area code, email address, age, and member card number. Sign the letter and mail it in an envelope with sufficient postage to The “Familiplus event: You could win $40 000$” Contest, 6000 rue Armand-Viau, Québec City, QC, G2C 2C5. Entries must be postmarked no later than March 17, 2021, failing which they will be void. Once your letter has been validated, you will automatically receive one entry in the draw. Only one letter per member will be accepted.

5.    Four random draws will be held March 31, 2021 at 11:00 a.m. at 6000 street Armand-Viau, Quebec City, in the presence of representatives at Familiprix Inc. from among all eligible transactions during the contest period. The odds of being selected for a prize depend on the total number of transactions registered during the contest week.

6.    The entrant whose name are drawn must correctly answer the mathematical skill–testing question that will be asked in order to be officially declared winners 5 x 2 + 8 – 3 = ?.

a.    Before being declared the winner, he must sign a declaration form attesting that he or she has complied with the contest rules and a release form releasing suppliers of prizes, the organization in charge of judging the contest, and all of their respective subsidiaries, managers, board members, employees, agents, representatives, successors, and rightsowners from any and all liability resulting from the contest or the acceptance or use of a prize. The declaration and release forms must be returned within fourteen (14) days of the date on the notice, failing which the prize may be forfeited.

b.    Entrants who fail to comply with these official rules will be disqualified. The prize will only be awarded to confirmed winner. The prize is non-transferable and must be accepted as awarded. Prize cannot be substituted for any other prize. By entering this contest, all entrants agree to abide by the official rules and judges’ decisions regarding any aspect of this contest, which shall be final and binding. Subject to the approval of the Régie in Quebec, the sponsor reserves the right to cancel or change this contest at any time without notice or by publishing a notice in the main regional newspapers if any factor whatsoever compromises the operation of this contest as stipulated in these contest rules. Entrants will not be contacted in any way, with the exception of the winner, who will be contacted by mail or phone. If the winner fails to respond within 15 days of the draw, the win will be voided, and a new draw will be held on April 15 10, 2021 with the same terms and conditions as above.

7.    The contest is open to Familiplus members in Quebec, Ontario and New Brunswick age 18 and up, except for employees (and persons residing in the same households) of Familiprix pharmacies, Familiprix Inc., agents, and their advertising and promotion agencies.

8.    All entrants release Familiprix Inc. from any liability or loss arising or resulting in any way from the prize, including any problem, breakdown, or technical malfunction of a network line, telephone line, online computer system, checkout system, software, server, provider, email, or browser, or any technical malfunction that may occur, including but not limited to a transmission problem or non-transmission of an email naming the winner, regardless of the cause, or of any problem completing the phone call.

9.    Familiprix Inc. is in no way liable for any incorrect or inaccurate information on the Familiplus entry form, whether caused by website users or by the equipment and/or programs associated with or used by the Sponsor, or by any technical or human error that may occur during the contest, including when entry forms are processed.

10.    This contest is subject to all applicable federal, provincial, and municipal laws. Disputes with regard to the conduct or organization of a promotional contest may be submitted to Régie des alcools, des courses et jeux du Québec for a ruling. Disputes regarding the awarding of prizes may also be submitted to the Régie, but only for the purpose of helping the parties reach a settlement. To request the winner, simply send a self-addressed, postage-paid envelope within six months of the draw date to Contest Results, 6000 Armand-Viau, Quebec City, Quebec, G2C 2C5.

11.    The decisions of the organization in charge of running the contest are final and binding. All entrants must agree to abide by these rules. By accepting their prize, winner authorizes Familiprix Inc. to use their name or photograph for advertising purposes in connection with this contest without compensation of any kind, and release Familiprix Inc. from any liability or loss caused by or resulting from the prize in any way whatsoever.

Familiplus is a big plus.
Earn points on almost all your purchases and quick collect rewards dollars.
Learn more

Fill the customer experience survey after your visit and you could win $500 in Familiprix gift card.